"One of the best speaker systems I've reviewed." - Brent Butterworth, S+V on the MilleniaOne & Sub 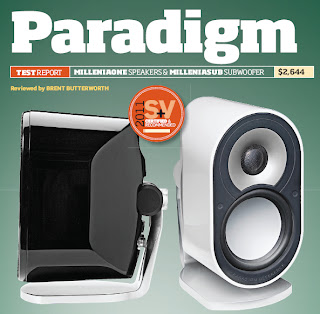 First Impression
"Glancing over the stylish, diminutive Paradigm MilleniaOne speaker, you might assume it's nothing more than a flimsy plastic housing packed with 25-cent drivers scavenged from a parts bin somewhere in the bowels of Guangdong Province... but besides its cute looks, the MilleniaOne has nothing in common with the typical "lifestyle" speaker. It's part of Paradigm's Reference line, so it employs custom-designed drivers, a stiff cast-aluminum enclosure, and a carefully tuned third-order crossover." 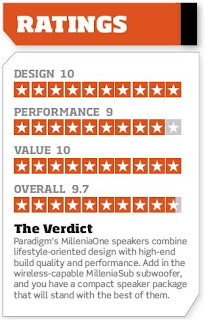 Performance
MilleniaOne:
"...the MilleniaOne delivers essentially the same sound whether it's mounted vertically or horizontally. The nearly perfect match from speaker to speaker helped conjure some of the most compelling surround sound I've heard from a small system."

MilleniaSub:
"When I first saw the MilleniaSub's wacky-looking woofers, I figured it might deliver waves of distortion when pushed with any recording more dynamic than a Norah Jones CD... I braced for an awful racket but instead heard clean, powerful bass. The weird subwoofer even played the deepest notes in electronica tracks... with authority - a feat most conventional small subs struggle to match." 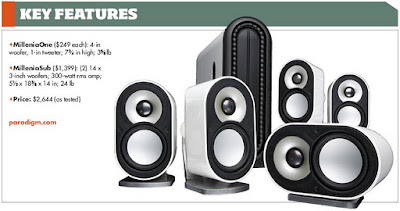 Conclusion
"I'm thrilled that at long last a speaker manufacturer decided to build a lifestyle system with all the care and quality it noramally lavishes on its cost-is-no-object gear. After an hour, I was convinced that the Paradigm MilleniaOne/MilleniaSub combo is one of the best lifestyle systems I've reviewed. And after 4 hours, I was convinced it's one of the best speaker systems I've reviewed."