Shane Buettner, previous editor of Home Theater magazine, begged to review the SUB 2 after an "extraordinary" demo experience in the Paradigm & Anthem demo room at CES 2010 calling it "the best home theater demo at CES 2010".

"The bass was sensational, thunderous, and room shaking, and yet it was strikingly refined. That was the first time I saw the SUB 2, a 4,500-watt subwoofer (rated RMS, and never mind if you can actually get that out of your wall), with six 10-inch woofers arrayed in pairs, firing out of three sides of the cabinet. You read that right. I was every bit as awestruck as you probably are now. Why would Paradigm design and build such a thing? Because they can. In home theater and in life, it’s my firm belief that anything worth doing is worth overdoing. If that’s your philosophy too, read on, because the SUB 2 is a helluva ride." 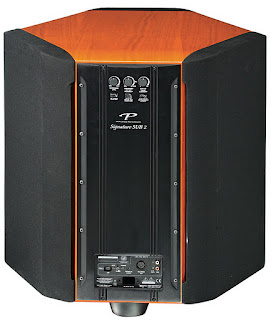 And so, after leaving the demo room wide-eyed, jaw-dropped and full of sheer joy, Shane beam-lined straight over to his good friend and industry colleague Mark Aling, Paradigm's Director of Marketing and begged for a chance to review one (or two) of the first production approved pieces.

Alas, we agreed to Shane's request and out of that came a thorough, well-written and extremely entertaining review. Below are a few of our favourite quotes, but if you haven't already picked up a copy of Home Theater's June 2011 issue, we hope you will Click here! and take the time to read the entirety....

Power & Measurements
"...the guys at Paradigm—with straight faces, I might add—claim the SUB 2 can deliver 4,500 watts (9,000 watts peak), but only if you and your electrician hook that sucker up to 240-volt service. I don’t have an electrician on call, so I had to live with a measly 3,000 watts (rated) continuous with my sissy-pants 120-volt service. Again, I’ll leave it to others to debate whether that much power can get out of my or anyone else’s walls to the sub, but here’s my tease on that: What I heard with my 120-volt service left me scared shitless to hear what this thing would sound like with 240 volts."

"...this sub’s –3-decibel point is a ludicrous 12 hertz. 12 freaking hertz! The measurements came with a note from audio technical editor Mark Peterson. We measure speakers in an automotive bay that we share with the car magazines in our parent company. The room is big enough to house at least a dozen automobiles, trucks, and SUVs and has a ceiling over 15 feet in height. When Mark ran the frequency sweeps, the SUB 2 rattled dust out of the rafters, something that hasn’t happened before or since".

Performance
"With the PBK on my side, plus Paradigm’s recommendation for corner placement, I felt confident I’d get great performance. Man, was I right. But the first thing I had to acknowledge was that I could no longer keep the doors in the back of the room (one to a walk-in closet I use for storing gear, the other to a bathroom) closed during movie nights. The SUB 2 would damn near shake them off their hinges if I didn’t leave them open."

"Perhaps more remarkable than the SUB 2’s brute strength is its sense of texture and detail. I had no idea what the hell was going on in those lower frequency ranges. There’s far more nuance in the low frequencies in modern movie soundtracks than I’d have ever believed."

"It was physically uncomfortable, but in a good way (I did maintain control of my bodily functions even though it was a struggle). The only aural confusion it created was that, at times, I couldn’t distinguish the movie soundtrack effects from my room and the rest of my house protesting against the immense pressure. I was ducking for cover during the early cannonades in Master and Commander: The Far Side of the World, and Cloverfield woke up my sleeping six-year-old."

"Another impressive feat is that, unlike a lot of big thud-pucker subs, you only hear this one when it’s called for. Working with the PBK in conjunction with ARC, I never heard it creep into male vocals or dialogue when I didn’t wish it to. It’s a surprisingly considerate houseguest in that respect. Until it gets loud, low, and intense, it simply does its job unnoticed, which is exactly what a subwoofer should do."

Conclusion
"I’ve never heard a sub that approaches the performance of the Paradigm Reference Signature SUB 2. This is 230 pounds of pure, pulverizing home theater excitement, and it earns my highest recommendation. Unlike other subs, you needn’t worry about whether your associated gear is up to the challenge. With this one, you need to be sure your house is structurally sound enough to withstand it. Why should you spend $9,000 on this behemoth of a powered subwoofer? Because you can."