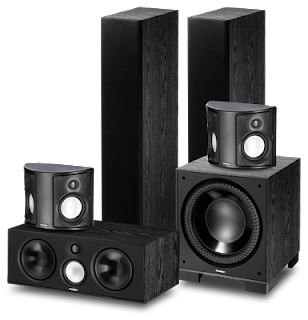 Approximately 20 years ago, Vince Hanada, reviewer at SoundStage!, bought his first set of Paradigm Monitor 7 speakers, which provided him with "years of enjoyment". Ever since then, Vince has either owner or reviewed each of the versions that followed. Today, SoundStage! published Vince's latest review of the new Monitor 11 Series 7 5.1 speaker system including 2x Monitor 11 floorstanding speakers, 2x Monitor Surround 3 surround/rear speakers, a Monitor Center 3 center channel and a Monitor SUB 12 subwoofer (see image above).

Not only did the Monitor 11 Series 7 5.1 system earn the Reviewers' Choice award, Vince also called it "a step up in performance from the previous Monitor Series, with improvements that include new and better drivers, a new configuration for the surround speakers, and surprising subwoofer performance from a small package."

Here are some more highlights from the review...

"The great timbral matching of the Series 7 speakers was evident... sound quality didn't change as the sound moved from speaker to speaker."

"One thing I noticed when listening to the Center 3 was that I didn't notice it. Dialogue was clear and clean, and it never drew attention to itself."

"As for the Monitor Sub 12, I was amazed at the volume and tightness of the bass this small box produced... the deep excursion of its cone was enough to generate loud playback levels in my room."

"Although I found the appearance of the Monitor Series 7 speakers a bit average, their performance was anything but, and well worth hearing at your Paradigm dealer."