"For the money, this gear is gold" - Witch Doctor, New Zealand on the Paradigm Mini Monitor

New Zealand's popular technology news and reviews site, Witch Doctor: www.witchdoctor.co.nz  got their hands on a pair of Paradigm Mini Monitor Series 7 speakers. Reviewer, Ashley Kramer, decided to pair them with Cambridge Audio electronics to create the ultimate "entry-level" system. Turns out the combo was "entry-level" in price but a whole lot more in terms of performance. Here's a few excerpts from Ashley's review...

Initial Thoughts
"You can't fudge it with budget, but this combo of Paradigm and Cambridge prove that sometimes paying less gives you just what you need. And more... I've heard equipment from both companies numerous times in the past and have always been impressed by the value for money on offer."

Surprising Sound Quality
Ashley sat down for some good listening sessions taking notes and was absolutely shocked that the words found on the page were closer to that of a high-end review. Descriptors such as "...deeply illuminated midrange... superb soundstaging...surprising levels of bass extension... screeds of detail" were among them.

Heavy Metal
"I was a little taken aback by how good the system sounded from the start... I've been known to stare at metal dome tweeters with a leery glare and I've sometimes had a good reason for my distrust, but the behaviour of this 1-inch satin anodized aluminum dome was exemplary, with no hard metallic tings, zings or bands and no overly bright sheen masquerading as an increase in overall resolving powers." 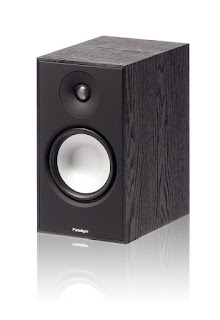 " ...bass notes were quite tight, there was no sense of the ports chuffing away in the background and the balance was entirely acceptable even without boundary reinforcement... So Paradigm has engineered this new series very well indeed from what I can tell here (and the previous versions were no slouches either)."

Mini Monitor Virtue
"The speakers display the expected mini monitor (as in type not model name) virtues – excellent imaging and precise instrument placement, along with plenty of speed and an overall feeling of cohesion and driver integration."

Budget Brilliance
"I found myself in the presence of the occasional flash of budget brilliance – long late nights with the volume down playing Van Morrison and the more mellow Led Zeppelin tracks hidden on my hard drive or on neighbor-free mornings with the pedal to the metal and Stevie Ray Vaughan or ZZ Top filling the room. At these times, it seemed that I could live with the system forever and never really want any more."

"...considering that the total value at the front of the room (including amplifier and DAC) still wasn’t over the $5K mark, that’s quite something to say and even more so to experience... there was some serious system synergy on the go, which is always a joy to hear, and it can take what might be mundane to lofty heights. There’s a magic here that I’ll remember long after the boxes with their bits head back down that highway. A highly, even wildly-recommended combination."