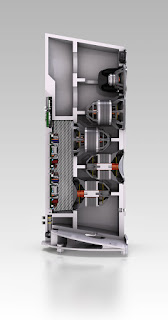 This bold new concept, unveiled at Munich High End 2015, offers an exciting glimpse into the future of Paradigm engineering.

The Paradigm & Anthem engineering teams have been working with a vision for more than five years. This journey of research, experiment, design, and development has culminated in a loudspeaker that is the amalgamation of superior acoustic components with bleeding-edge technological innovation. It is our most ambitious speaker design ever.

Concept 4F is a true full-range hybrid loudspeaker, the perfect balance of powered woofers with a passive upper register array. It features TruExtent® Beryllium 1" tweeters and TruExtent® Beryllium 7" midrange drivers with perforated phase-aligning lenses, and four Ultra-High-Excursion Differential Drive 8.5" woofers in a vibration-cancelling configuration (two front-firing, two rear-firing). Each woofer pair is powered by a separate DSP-controlled 700 W RMS amplifier for a total of 1400 W RMS (2,800 W Dynamic Peak), and combined with exclusive technology like Anthem Room Correction (ARC™) capability. And then some.

The result is a unique sonic platform that reinvents luxury performance in a loudspeaker and ushers in an audacious new era for Paradigm.

“Under development for more than five years, the Concept 4F sounded exceptional in a brief demo, with astounding bass extension and definition coupled to neutral, detailed, and transparent midrange and treble reproduction.”

“This is a serious speaker from a serious company. It might have started out as a toe-in-the-water concept, but given the response at the show, I think it’s safe to say that Paradigm will be moving upmarket -- pretty soon and with a product that looks very like the Concept 4F. How far upmarket? It’s impossible to say, but don’t think that this speaker will be cheap, although I’m confident that what it will do is maintain the company’s reputation for value. It goes straight to the top of the “speakers I’d love to get my mitts on” list.”

"Paradigm’s Concept 4F was, by a long shot, the star loudspeaker of High End 2015… the Concept 4F’s beautiful appearance is a higher rung on that ladder. I particularly liked the way the rear of the cabinet rises, supported on something like the heel of a high-heeled shoe. The vents for the rear-mounted woofers (see below) create nice visual touches of their own. But it’s on the technical side that the Concept 4F really stands out. Visually, technically, and sonically, I was blown away by the Concept 4F. Look for info on the sound in this space in August.” 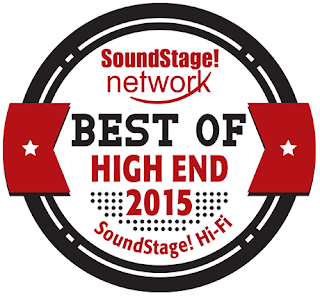