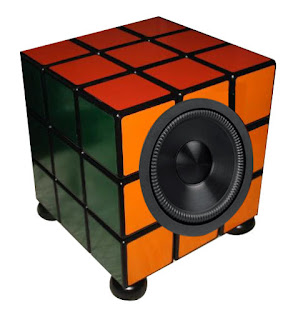 Bass is the easy part, isn't it? Just move a big driver, and like magic: low frequencies come out. That equation was fine for big 80s boomboxes, but it doesn't explain serious bass response and why it's important for you and for your sound system.

At Paradigm, we have our own ideas about bass. We've studied the issue for over 30 years. We've come up with some improvements, defeating many of the issues that get in the way of producing low frequency response. And we've come up with some ways to improve on those improvements using better technology both inside the subwoofer enclosure, and out.

So you know we make subwoofers for every application, now hit the jump to find out how Paradigm bass is different from other species of bass.

The Three Dimensions of Bass

It's easy to think of subwoofers as the linemen of the audio football team; producing the stout, immovable wall of sound that all the other frequencies have to find a way around. But your subwoofer doesn't have to be a big dummy. (Calm down, you linemen out there. We're not saying you're dumb. Just BIG.)

The fact is that most subwoofers are very limited. They might be low and loud. Or they might loud and clear. They might exhibit some well-blended dynamic contrast. Or, they might be some combination of one or two of these characteristics. The trick is to use design, engineering and technology to combine all of these elements and produce well-blended, dynamic low frequency response that is also, categorically, low and loud.

How did Paradigm solve this Rubik's Cube of Bass?

We did it by [1] formulating better driver materials and motor design, [2] efficiently increasing amplification, and [3] engineering superior enclosures.

Each ingredient of this fundamental recipe works in tandem with the other elements in its own special way. Change one thing, and you change them all. And then Paradigm went one step further, by considering an element most other subwoofer manufacturers ignore. But we'll get to that secret sauce later.

When it comes to subwoofer drivers and the motors they depend upon, size is not everything... but it helps. The bigger the motor, the more it's able to translate power into movement and produce deeper bass via the subwoofer's driver cone. A big motor can produce prodigious sound from a moderately sized driver cone. And when a big motor gets to produce bass from a big cone, it can really shake things up.

At Paradigm, over 30 years of research into the basics of bass have taught us that the interplay between driver motor and woofer cone requires one more element to seal the deal, pun intended: The surround, which does actually seal the deal.

As the motor moves the cone back and forth, without a seal between the enclosure and the cone the driver would just flop out of the cabinet like a yo-yo. Incredibly, most surrounds are afterthoughts. They are made of materials that sound like they would be durable, like rubber or foam. But after taking a lot of bass-producing back-and-forth punishment, even rubber tends to have a limited lifespan.

Paradigm has defeated this subwoofer weakness by rethinking the surround concept and improving it with new, patented technology.

First, we changed the material used to make surrounds. Instead of wimpy rubber or foam, we designed a special copolymer mix, a Thermoplastic Elastomer (TPE), that shares and enhances the physical properties of the most durable materials. Our TPE surround material is more reliable, more stable, and more flexible than standard surround material. It lasts.

Then, we changed the design of the surround. Our research demonstrated that by adding specially designed ridges to the surround, we could exponentially increase the damping factor of the TPE material. We developed an in-house manufacturing process to do just this. The result is called Active Ridge Technology (ART), and it effectively cancels stray resonances and performance-destroying cone vibrations. This patented innovation increases the flexibility, durability and lifespan of our surround material.

Finally, we found that sealing the surround directly to the cone, in a proprietary process we call Overmolding, creates a durable yet impervious connection between the cone and the cabinet.

And that's just from better driver and motor design!

Next time, we'll talk about how higher power, responsibly handled, drives deeper bass. You'll want to plug in to that. And later, we'll reveal the secret sauce that makes Paradigm bass so tasty.