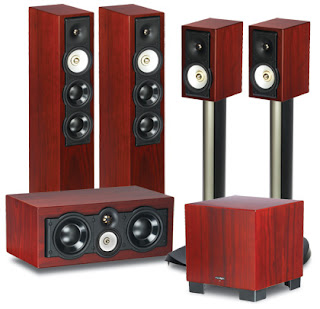 Aaron Garrecht of GoodSound! reviewed the Paradigm SE system (see above) and had plenty to rave about with this hybrid breed. Read on to hear what Aaron had to say after throwing all kinds of materials at the SE's...
Music
Diana Krall, Led Zeppelin, Eagles...
"Whatever the material, I found the SE 3 a very neutral, if not an aggressively neutral speaker. Voices were presented with the utmost clarity, accompanied by crisp highs and an accurate and impressively punchy lower end. At normal listening levels the sound was quite pleasing, reminding me several times of models higher up in the Paradigm hierarchy."

Movies
The Duchess - Opening Scene
"I could hear not only the spatter of water hitting the ground, but could tell by the smacking sounds that the surface it was striking was one of marble or concrete, even though I couldn't see it. This kind of textured details was also present when I listened to the rake being dragged through the grass: I could hear the metallic tinniness of the rake's teeth, indicating that the grass was quite short, though I couldn't actually see the grass. It is these sorts of details that help paint a picture in the mind and add to a film's atmosphere. The entire SE system painted those pictures brilliantly."

The Lost World: Jurassic Park - Chapter 5
"The sounds of trees cracking and crashing to the ground, of water splashing as Harding’s colleagues run upriver in search of her, and the deep thudding of the dinosaurs’ feet hitting the ground, were all presented with clarity and solidity, showcasing just how easily this system can portray subtle details during huge dynamic swings. The Paradigms were able to create a holistic soundstage filled with detail and nuance."

Mr. & Mrs. Smith
"I couldn’t help but notice, yet again, how well the Special Editions worked together as one. The SE 3s provided a larger-than-life soundstage of background music, gunshots, shell casings hitting the ground, and explosions. The SE Center again proved the jewel of the system by tightly conveying the visceral impact of each punch, kick, slap, and gunshot precisely where it should have been in relation to the image onscreen, all while reproducing voices with a distinct naturalness."

"Since being introduced to the Paradigm Monitor 7 speakers in 1999, I have been continually impressed by the levels of quality, performance, and innovation that Paradigm offers at commendably low prices. The new Special Edition models not only look and perform much like Paradigm Reference products, but do so at a much lower cost. If you’re looking for a home-theater package that punches way above its competition while offering genuine tastes of high-end sound and looks, then Paradigm’s new SE range deserves a serious look."
Want to read on?  Believe it or not Aaron goes into even more detail in his review! Click here to read the entire Paradigm SE home theater system review at Good Sound!
Posted by Paradigm Electronics